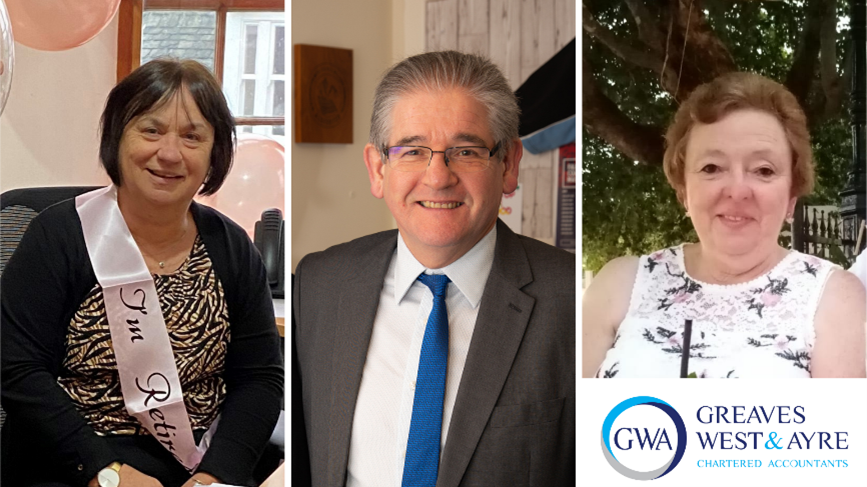 It is with mixed emotions that Greaves West & Ayre (GWA) has announced the retirement of three of its longest serving members of staff.

Essential fixtures in the firm, Lynn Ritchie, Anthony Hogg and Daphne Bell have over 125 years of combined service. They have each played a part in shaping GWA into the firm it is today.

Lynn Ritchie began her career at GWA’s Hide Hill office in Berwick-upon-Tweed in 1979.  In 1982, she married and moved with her husband to Dunbar.  Ian Davidson, who was GWA’s senior partner at the time, recommended her to another firm of accountants based in Dunbar, N C Campbell & Co.  Lynn worked there full time until 1986, then continued part time from home while she raised her family.  In 1991 she resumed her fulltime role at N C Campbell and, following the merger of the two organisations in 2016, found herself under the GWA banner once again.

Although Lynn’s main role has always been accounts preparation, the size of the Haddington office meant the day-to-day job was varied.  Over the years, Lynn has had experience of VAT, staff training, income tax computations and has even tried her hand at reception duties.

Anthony Hogg joined GWA in October 1976 after leaving Berwick Grammar school. He started out as office junior to Bill Renton in the Hide Hill office.  His early duties very varied and even included being the office runner to Ladbrokes to put on bets and collect winnings! Another task was acting as a ‘security man’ for the weekly trips to the bank to collect the cash used to prepare the wage packets payroll clients.

As a boy, Anthony enjoyed working on local farms during the school holidays, particularly at harvest time.  With this knowledge and love of farming and agriculture, it is perhaps no surprise that a lot of his career at GWA has been preparing accounts for farm and estate clients as well as limited company accounts for agricultural businesses. His skill and experience resulted in Anthony helping to train many of the current staff, including partners.

GWA has grown massively in terms of staff numbers during Anthony’s career; when he started the firm employed between 20 and 30 people, the number has now increased to 140.

Anthony retired on 11 October 2022, on his birthday exactly 46 years after he started.

Admin assistant, Daphne Bell, joined GWA 1973, initially as an office junior, working in the original GWA Sandgate office in Berwick-upon-Tweed.  As was common in the 1970’s and 1980’s, Daphne took a career break to raise her daughter.  She returned in 1989 and has since been supporting the whole office in a variety of ways including typing, reception work, answering phones and general admin duties.  When GWA expanded its services to include Wealth Management, Daphne extended her support to that team when it operated from the old Legion building in Sandgate.

Digitalisation has had a huge impact on Daphne’s roll. She learned to type on a manual typewriter, subsequently progressing to an electric machine and, now everything is done via GWA’s IT network.

GWA Partner, Robbie Dalgleish, commented: “Lynn, Anthony and Daphne are tremendous employees who have been with the firm for a significant part of its journey and we are indebted to their commitment.

“Since Greaves West & Ayre was established in Berwick-upon-Tweed in 1918, the world and the accountancy profession has changed beyond recognition. GWA has grown and continued to adapt to new ways of working, while maintaining the traditional values on which it was founded.

“While we are sad to see Lynn, Anthony and Daphne go, everyone at GWA sends them best wishes for a well-deserved, long and happy retirement.”

SBCC is a member of the Scottish Chambers of Commerce Network